If you have ever considered doing it or have indeed consummated this innocent act though you might never admit to it; (as I have for my own embarrassment and shame)  then you might want to rethink how you are using your mobile device, or even, you whole online behaviour.

It is widely known as a fact, a given even amongst the most fierce advocate of digital technologies: Social media and social technologies are highly addictive!

Even Steve Jobs did not allow his children to play with an iPad so what else is our there to be said…. Have the great industry champions been luring us into using their cutting edge gadgetry devices, apps and social platforms in order to get us all hooked up? The great  stoic philosopher Seneca once said:

“Be wary of the man who urges an action in which he himself incurs no risk. Lucius Annaeus Seneca 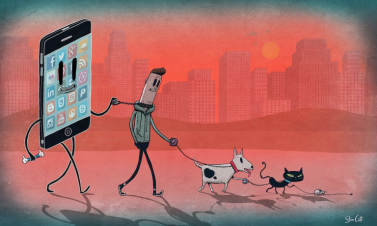 Why those ‘great tech influencers’ at the top is pushing down all these new flashy products to us mere mortals if they deny their own the pleasures of using it..

Through the development of science and technology all the advancement we have today in society came to exist. Without it, we would have never made it to the moon for example (if you believe they put the man on the moon, but that’s an argument for another day). Since our early stages of development as sentient intelligent species on this planet we have attempted to leverage the elements of nature in our favour to give us food, shelter, comfort and a sense of belonging.

In the same way digital technology have been handed down to from the techie gods as an amazing gift and tools to mankind, cultures and societies around the world bringing humans ever closer together. But that providing it does not enslave us into a box of uniformity conditioning herding us to do and become what ever they want us to be.

An article on Quartz this week mentioned a worrisome number of how many times a day mobile users are touching their phones: an alarming 2617 times and that including tapping, typing, swiping and clicking.

Another leading whistle blower within the digital industry is former Google employee Tristan Harris who affirms that “all of us are jacked into this system” in a interview for The Guardian. He added “…All our minds can be hijacked. Our choices are not as free as we think they are.”

So, if that is true, are digital technologies taking away our voices? or veiling it under streams of fake news, algorithm manipulation that can start false public outcries, fake social accounts etc.?

What are you thoughts?

“I would rather be without a state than without a voice.” Edward Snowden